We thought we would celebrate the news by looking in more detail at one of the nominees Zoe Strauss – in particular at the project that made her famous The ‘Billboard Project’.

The Billboard Project was a series of 54 billboards featuring photographs by Strauss, installed as part of the Philadelphia Museum of Art exhibition ‘Zoe Strauss: Ten Years’.

Installed throughout Philadelphia, the project was loosely structured around the themes of the Odyssey, presenting an epic story about journey and homecoming.

Displaying photographs from Strauss’s travels around the country including Grand Isle Beach in the Gulf of Mexico, Venice Beach, CA, Rosedale, MS, and Fairbanks, AK, the Billboard Project was designed for both residents and visitors, encouraging each to construct their own narrative and journey around these images. 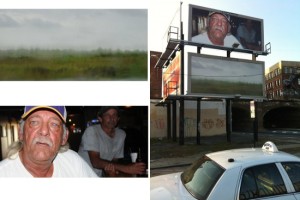 Without informative text, branding or logos. They effectively eliminated 53 spaces available for commercial advertising. As the project website emphatically states “The Billboard Project is all questions and no answers”.