I hear a lot of people say that they cannot get the same results out of digital cameras as they did with film.

Reasons for this include: –

1. The low pass filter that sits in front of the image sensor to stop flaring or the mosaic effect you can get – similar to wearing a striped shirt on TV. This filter has a tendency to soften the contrast and apparent sharpness of an image and hence all digital images need some form of contrast and sharpness adjustment.

2. The subject of this paper – the compression throughout the digital workflow of the Dynamic Range.

Dynamic range is represented by the tonal range in an image from black to white.

• In camera terms the human observation differentiates between 16 – 20+ stops of light depending on the quality and direction of light.

• Most quality digital cameras can capture 10 – 12 stops of light.

• Most monitor screens will show around 6 stops of light; and

• Printers and inks display around 4 stops of light.

So the issue is one of output not capture.

You can see from the above example shadow detail in particular is lost all the way down the line. If the camera has captured 10 – 12 stops of light then there must be a way to draw out this detail and not have it show as black or white in an image.

A quick point on shooting. Do not blow out your highlights (the right hand side of the histogram) as there is no detail in the blown out highlights. Trying to recover blown highlights will turn that part of the image grey. It is easier to recover detail from the shadow area. Having said that there are often occasions when you will have blown highlights, often called the ‘Blinkys’ in your histogram, and you have to make a decision as to whether you accept this given the dynamic range you are trying to cover.

In the days of film photographers used techniques like Dodge (to lighten) and Burn (to darken) areas of an image when printing the negative. These tools are available in most good post processing software packages.

“Dodging and burning are steps to take care of mistakes God made in establishing tonal relationships.”

But I would like to focus a bit more on understanding histograms in relation to dynamic range.

Histograms are a bar chart of the number tones represented in an image from black (on the left) and white (on the right).

There is no such thing as the perfect histogram as all scenes have different tones and some might be all white, a shot of the snow with the histogram bunched to the right, while other cover the full gamut of the colour range in a broad landscape.

The following is an example of what some would call the perfect histogram. 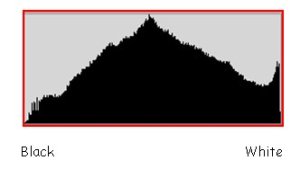 When viewing this image on the monitor, showing 6 stops of backlit* light it may be ok but when you come to print it, with only 4 stops of reflected* light, you will most likely be frustrated because you cannot see detail in some of the shadow areas where you expect to see some.

* Note: You are working with mixed light sources here and what you see on the monitor cannot be accurately represented in print. The monitor works in the RGB colour space (additive colours) and projects light from behind the image. The print is made within the CMYK colour space (subtractive colours) and you view your print with light reflected off it.

While this theoretical histogram might look great when processing the reality is that the human eye cannot see the subtle changes of tone showing in the graph.

The numerical range of colours in the histograms correspond to 0 (zero) being black to 256 being white. The practical result of this histogram when printing will show 0 (zero) as black, 10 will still look black as your eye cannot differential this subtle change. Going further 50 will look black to the eye and it is not until you get into the 100’s that you start to see any discernable change of tone.

It is not that we haven’t captured the detail, we have, the camera will capture

So we need a technique to move the tones we cannot visually see into the areas we can see.

We do this in one of two ways.

If you are shooting in jpeg format then good post processing software will provide a Shadow/Highlights command. It generally assumes your image has lost shadow detail (fancy that) and offers an automatic fix on opening by increasing shadow detail by as much as 50%. I generally find this too strong and I start around 25%. The software makes no assumptions about highlights and you must make any changes yourself.

After this your image may look a bit flat, or ‘milky’ but you can add back contrast by moving the black and white clipping points in the Levels command in a fraction and/or using the Curves command and adding a slight S-curve to reinstate contrast.

Many try to add contrast before unblocking shadow detail and this only darkens the image further.

If you shoot in RAW then most RAW converters have a Fill slider to open up the shadow detail. You will find that this moves a shadow detail into the middle area and so I also tweak the mid range command (normally the Balance slider) to move the middle tones a fraction to maintain their relativity in the whole scene. I also move the Black slider up to around 8 to add some contrast to the scene.

I open the image in my normal processing software and then apply Curves and Sharpening. I am now doing so from a better tonally balance image.

There are other ways to alter the dynamic range of an image: –

• bracketing of exposures at time of capture and blending of multiple images,

• double processing the RAW image for shadow and highlights and then blending, and;

These are all techniques in their own right and it is not the intention to cover these here. There is plenty written on the web about them.

First understand dynamic range from seeing to capture, processing and output then decide if you need to employ other techniques to achieve the representation of the image you captured.
Article courtesy of 4WD Exposure which offers workshops and tutorials on basic photography and image processing – www.4wdexposure.com.au